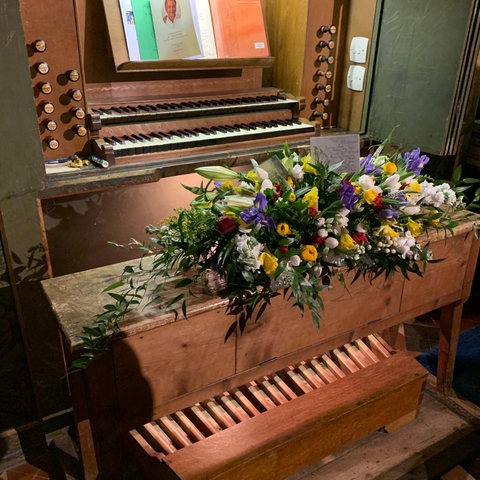 Our organist CELEBRATION OF LIFE

Thank you to everyone from all over the Bowbrook group, who pulled together to create BOB’S CELEBRATION OF LIFE in Hanbury in February.The willingness of so many to contribute is a reflection of the regard felt for Bob and his family, a family which has served our group of churches with love and loyalty.

One hundred and eighty people gathered to remember, sing and pray, bringing flowers and food and hearty voices and thanks also to all who helped with logistics, parking and welcoming.

All music included in the service was recordings of Bob playing in Hanbury.This had been discreetly secured in recent years by son John, because Bob was very much against the idea; we are so glad to have had this small reminder. A selection of Bob’s favourite music was also played before and after the service, stirring an aura of nostalgia for all.

Music was Elgar’s Nimrod and Bach’s Eight short preludes, a favourite so frequently played at the end of services.Hymns were, Lord of all hopefulness, Abide with me and The day thou gavest Lord has ended.It was also a great pleasure to meet Bob’s sisters who call him Rob!

Sylvia and John have endlessly passed on their thanks to so many and continue to do so; everyone agreed that the service was uplifting and fascinating, feeling sure that Bob would forgive all for doing much more than he would have wished!Bob’s retiring collectionamounted to over one thousand pounds in support of Cancer Research UK.

Thank you to Sylvia and John for coming along to the Sunday service which followed.They remain bruised by the sudden decline in Bob’s health when treatment seemed to be going so well.We remember them in our daily prayers and we pray that they will feel the comfort ofGod’s love and also ours, in the coming months.